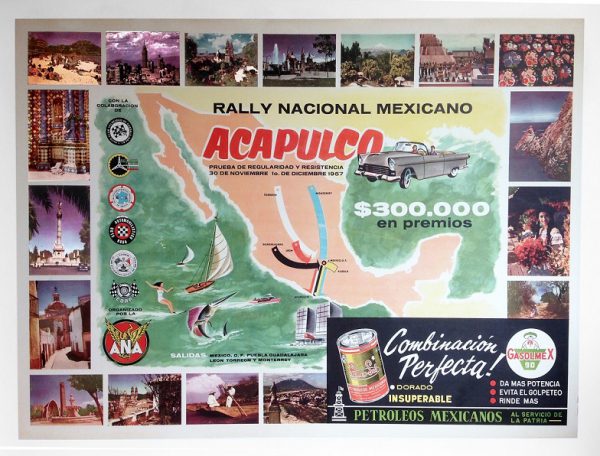 This rare vintage original poster shows the Mexican peninsula and is in fine condition on linen and measures 37×27.25″.

The rally started from five different cities and ended in Acapulco, Mexico. Jim Binford and Bob Schroeder were in a CSSCI-sponsored Corvette, Paul O’Shea in Allen Guiberson’s Mercedes 300SL Gullwing, Ken Miles in a Simca and Joakim Bonnier in a Volvo.

The rally was won by Fernando de Leeuw Murphy in an Oldsmobile. He collected $8,000 for his trouble. After the Acapulco finish rioting broke out. At the victory banquet in the Las Hamacas hotel furious competitors refused to accept the official results, claiming they were fixed. Charges varied from chronometers that weren’t synchronized to a complete absence of workers at certain checkpoints. Officials were booed from the podium and the ceremony ended in chaos.  (nmp)